The latest official firmware binary can be found on the firmware page.

You have a new firmware and you want to put it in the USB2AX, Great! There are three ways to do it: 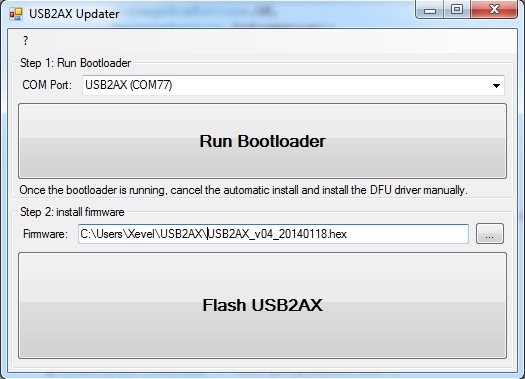 WARNING Debian Squeeze only has 0.5.1, so on this distribution you might have to build it from sources.

Solder a small capacitor (in the uF range) between GND and HWB, and a button between GND and RST. When you press the button for a second or two, this will discharge the capacitor, and when you release the button, it will keep the voltage on HWB low enough for long enough for the bootloader to run.

Take a pair of metallic fine tweezers or a cable with stripped ends, touch one end on the GND pad and the other one successively on HWB (leave it for a second) and RST (just touch it). You will get better results if you switch from one to the other very quickly. If you are lucky, the stray capacitance of the HWB trace maintains it low enough for long enough for the bootloader to run.