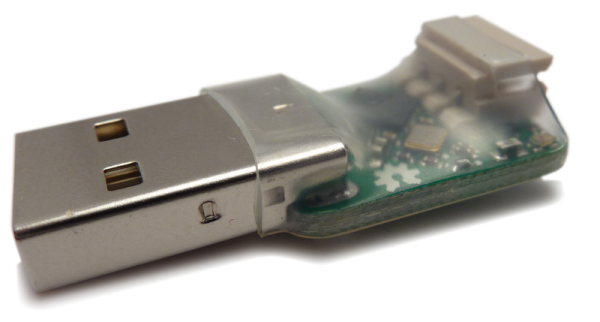 The USB2AX is a small interface to control Dynamixel servomotors like the AX-12 from a computer. It plugs into a USB port and has a 3-pin Dynamixel connector to be connected to the servos.

If you're in a hurry, jump to Quickstart !

If you still have problems, send an email to: contact@xevelabs.com

Status LED: the LED lights up GREEN when the USB2AX is ready, RED if not (no driver, USB authentication error…).
The pads and jumper under the PCB are detailed in the GPIO and SPI page.

What is it useful for then?

The USB2AX is a direct way to control servos to move legs, arms or claws in a robot with an embedded computer (laptop or Raspberry PI for example).
You can also use it as a tool to setup, diagnose or fix your servos.
Have a look at some examples of application!

What servos can it talk to?

The USB2AX can talk with the Dynamixel servos which use a half-duplex TTL interface (3-pins connector).
More specifically:

What are the limitations?

Fortunately, the USB2AX can not do everything

Read the Quickstart Guide, and be on your way

For Linux users, have a look at the FAQ too for some additional “gotchas”.

More information for everyone:

Some more stuff for power-users:

Advanced topics to use the full potential of the hardware for your specific application!

First prototypes, v1.0, v3.0a, v3.0b, USB2AX Mini, v3.1a.
v2 never saw the light of day, it was very similar to v1 and scraped when I realized it was going to be much bigger than v1. Instead, I went on with v3 that used smaller components (0402 passives instead of 0603, QFN instead of QFP for the ATmega). And finally the commercial v3.1a, which differs from the original v3.1a only by its corners: they were rounded, they are now square for manufacturing reasons.

v3.2a that went on sale on Mai 2014 is a slightly more rationalized version of the 3.1a, witch uses more of the Seeedstudio Open Part Library components in place of more expensive and difficult to source ones (crystal and LEDs mostly).

Xachikoma by Xevel, the four-legged reason for creating the USB2AX. 4 legs, 5DOF each, plus powered wheels instead of feet.
Aria by Cybedroïd, a life-size humanoid robot.
Charlotte by KevinO, an hexapod controlled with a Raspberry Pi through an USB2AX.
HexaWheels by Siempre Aprendiendo, an hexapod with wheels and a Raspberry Pi.
Glider by Nick Donaldson of http://gotrobots.com, a big hexapod using MX-64T and a USB2AX, with free wheels to move like the Roller-Walker!
Golem by KevinO, a big hexapod using an Intel NUC.
3D printed leg prototype by HXP2, using MX-28T and an ODROID-U3.
demo with BeagleBone Black by bloftin3000.

Thanks:
Dean Camera for making the greatest USB library for AVR, LUFA.
Weston T. Schmidt for making the cross-platform app DFU-Programmer!
Cybedroïd pour la documentation en Français / for documentation in French.
Trossen Robotics, Robosavvy, SeeedStudio and Adafruit for the help (direct or indirect) to bring the USB2AX to market.

The USB2AX is available via multiple distributors, see the Start page.